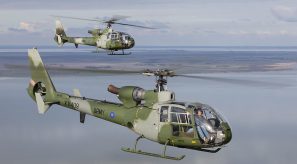 The experience is for everyone!

Description: Enjoy the SA341 Gazelle helicopter as you take in the stunning southern coastlines.

Experience includes: A safety brief, introduction and overview of the aircraft . Coastal Reconnaissance flight included and video of the experience(optional)

The Aérospatiale Gazelle (company designations SA 340, SA 341 and SA 342) is a French five-seat helicopter, commonly used for light transport, scouting and light attack duties. It is powered by a single Turbomeca Astazou turbine engine and was the first helicopter to feature a fenestron tail instead of a conventional tail rotor. It was designed by Sud Aviation, later Aérospatiale, and manufactured in France and the United Kingdom through a joint production agreement with Westland Aircraft.

A heavily modified Gazelle was the centerpiece of the 1983 John Badham action film Blue Thunder. The same helicopter appeared in the short-lived 1984 TV series by the same name starring James Farentino. The modified Gazelle went on to be used in the TV mini-series Amerika.

A modified Gazelle was used as a light attack helicopter in the 1988 Sylvester Stallone film, Rambo III. The helicopter was shot down by the main character, using a bow and arrow.

Product added to your cart.

Purchase another Voucher/book another jump?